skip to main | skip to sidebar

What Price Beauty? The Corset! 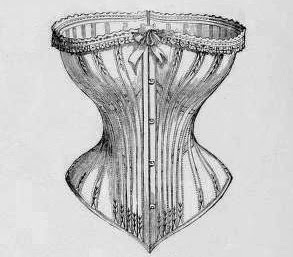 Hello everyone. My dear friend Louise and I recently took a break from playing with buttons and enjoyed an evening poring over a stack of Home Needlework Magazines from the turn of the twentieth century. 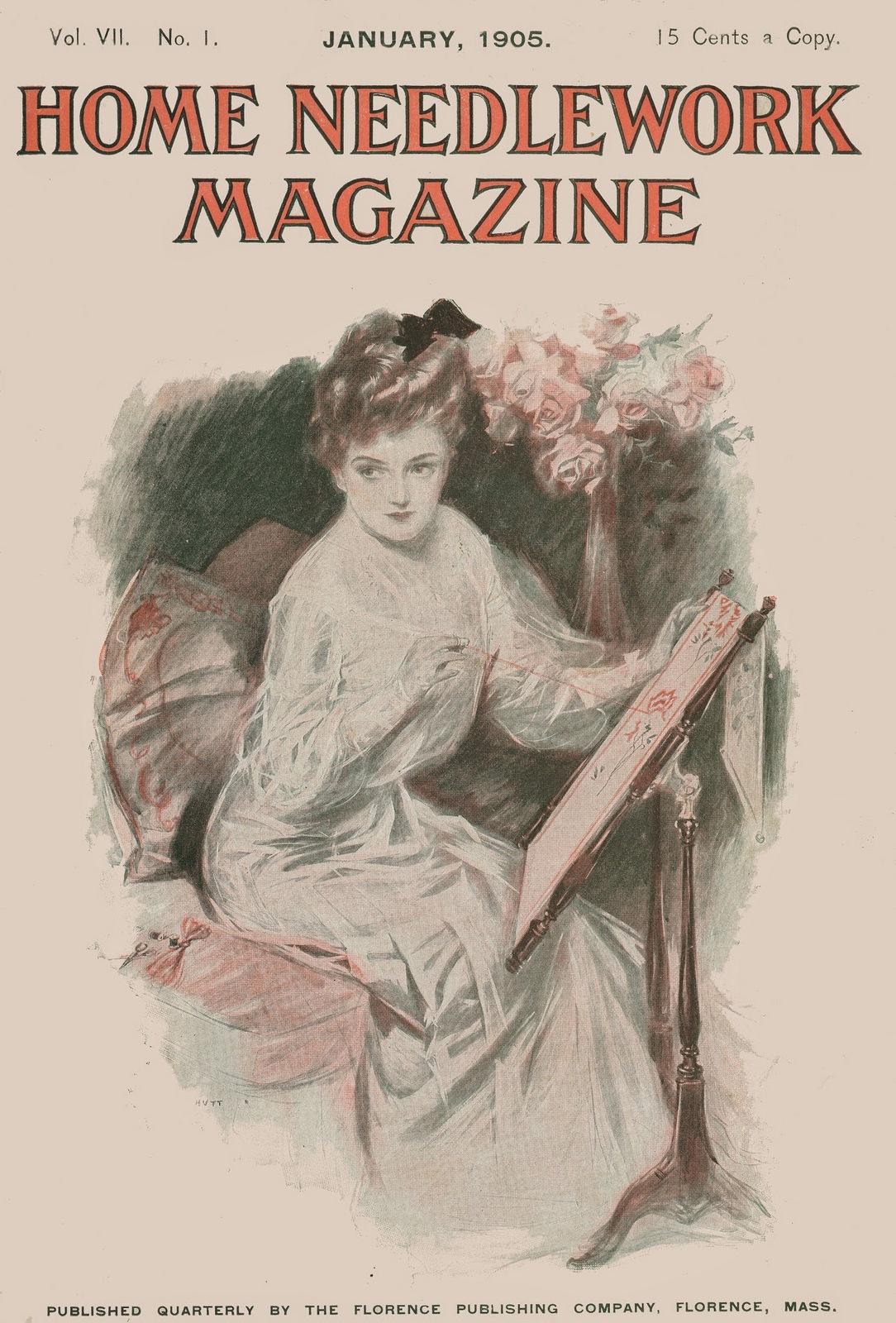 The magazines are full of embroidery, beadwork, and lace patterns, with a wonderful array of images of clothing from that period 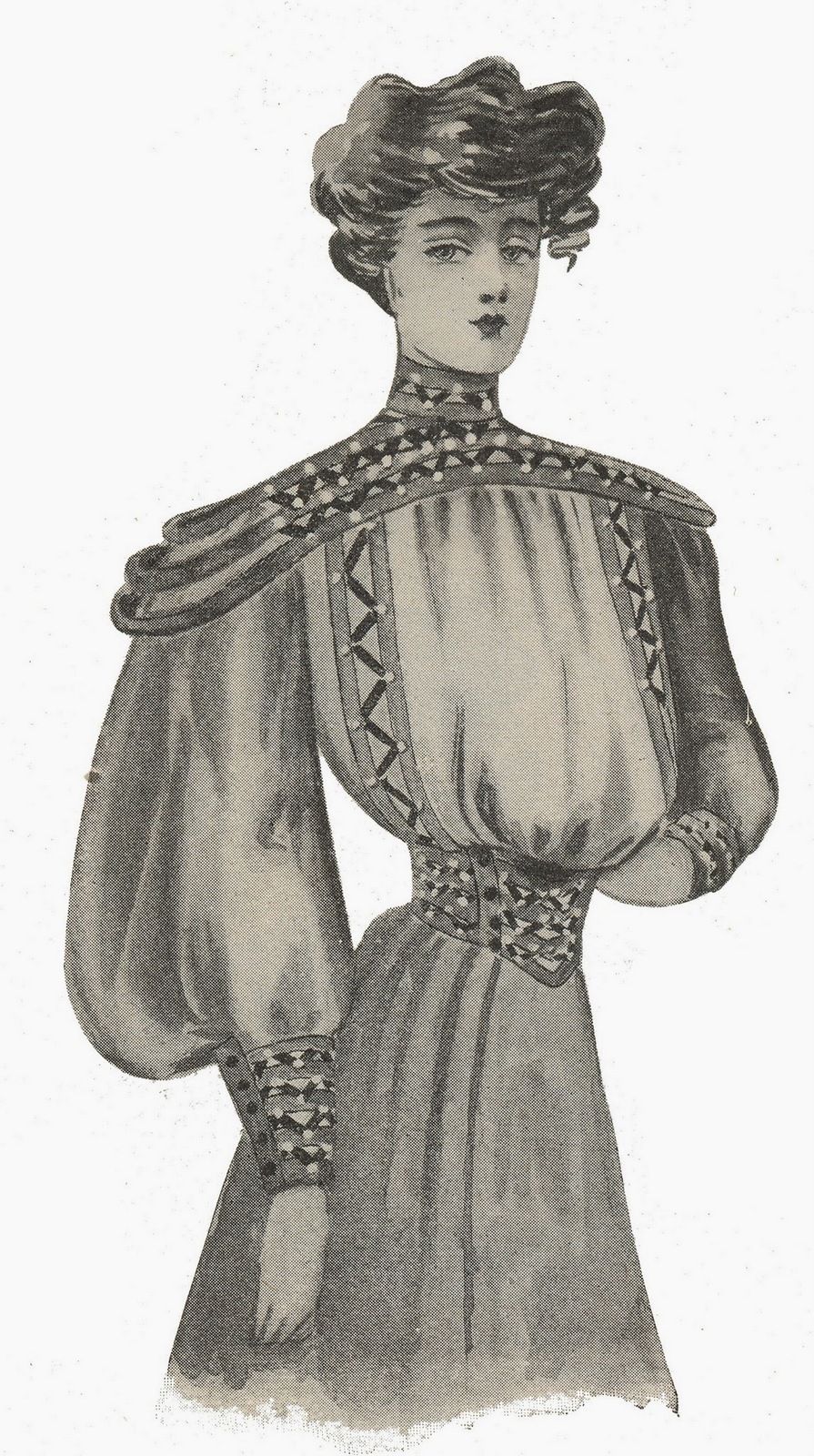 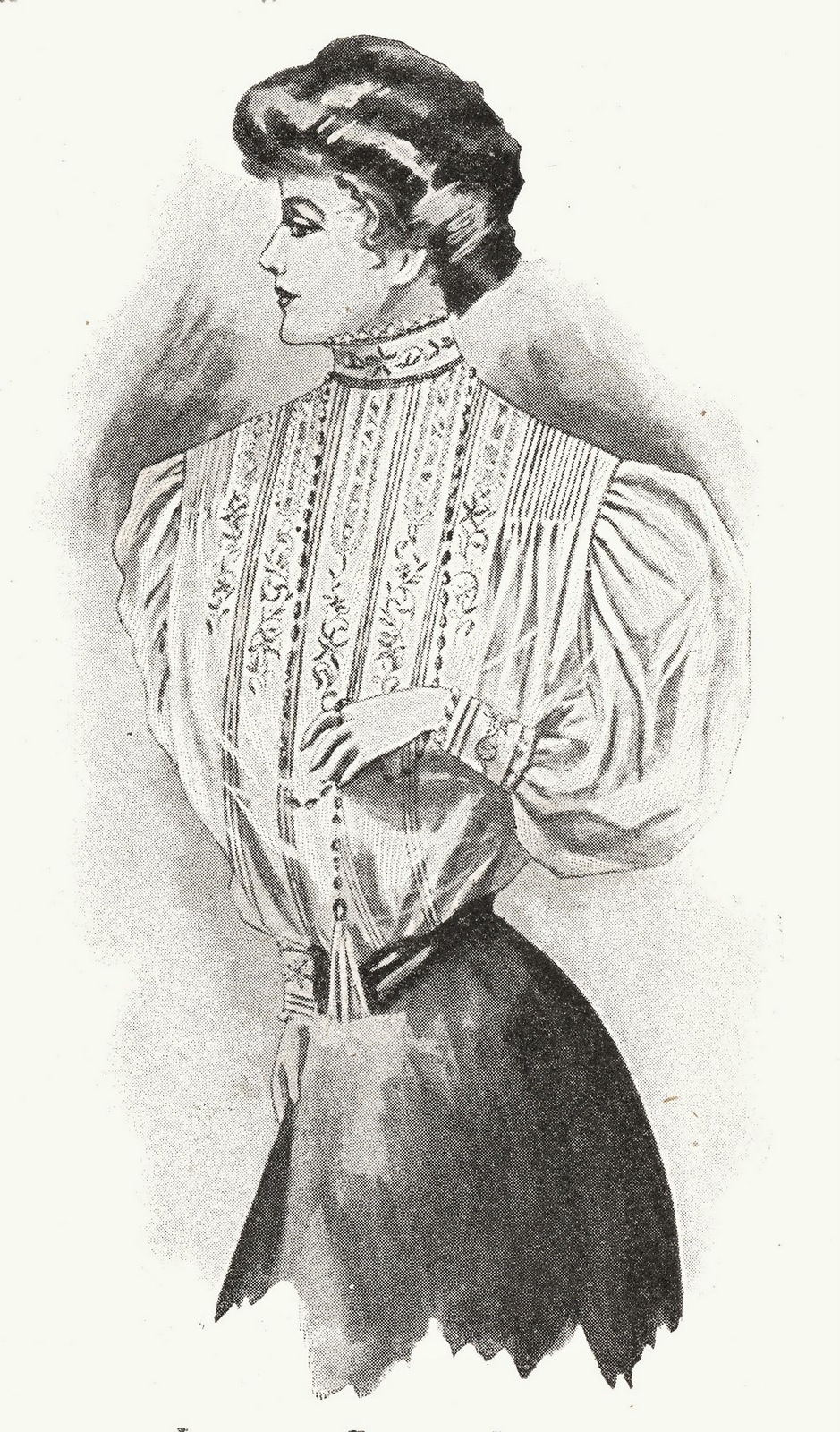 Of course, you can’t help but notice the unnatural shape of the women. After all, what lady of the time would be caught out without her corset tightly laced? 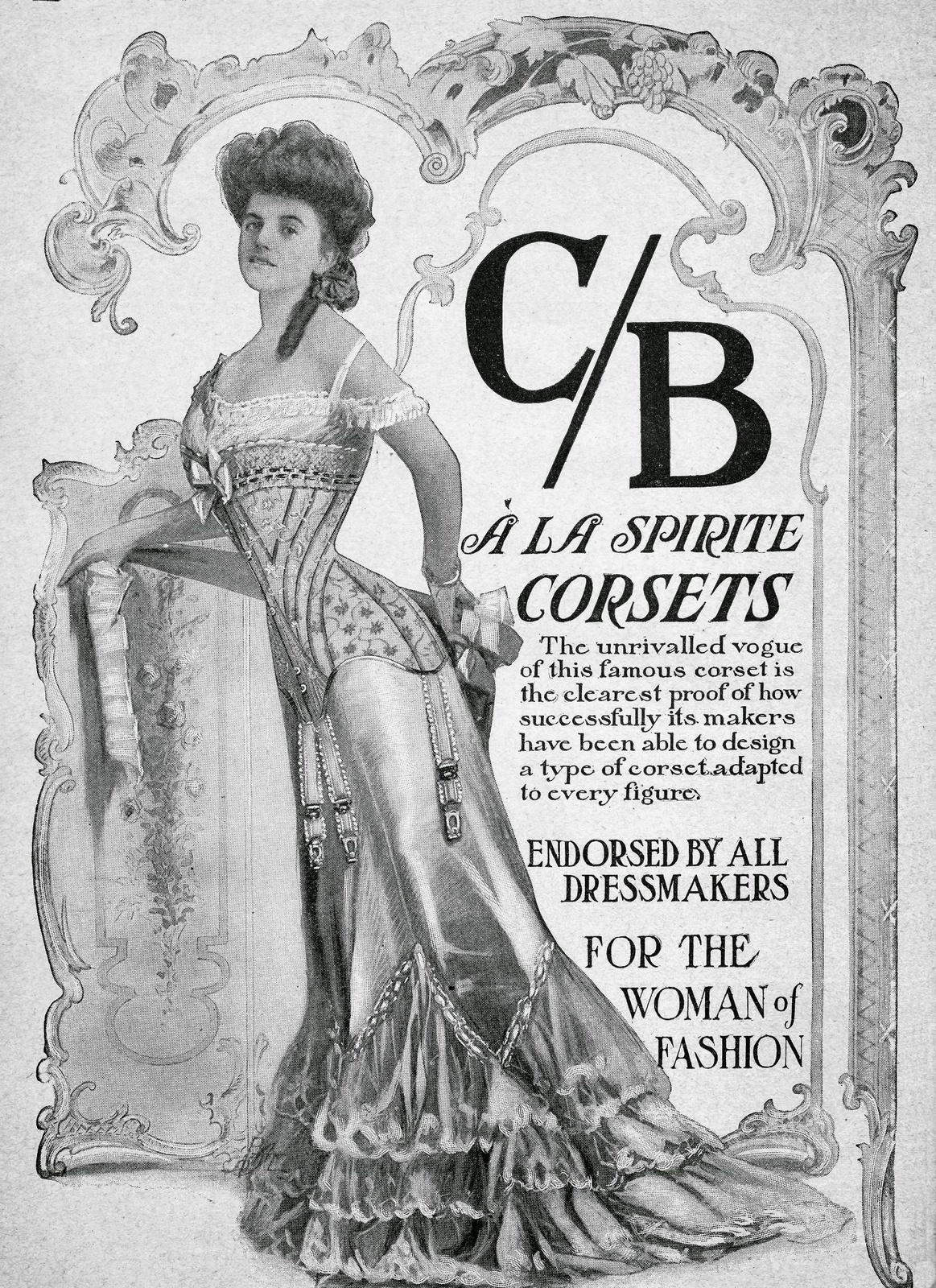 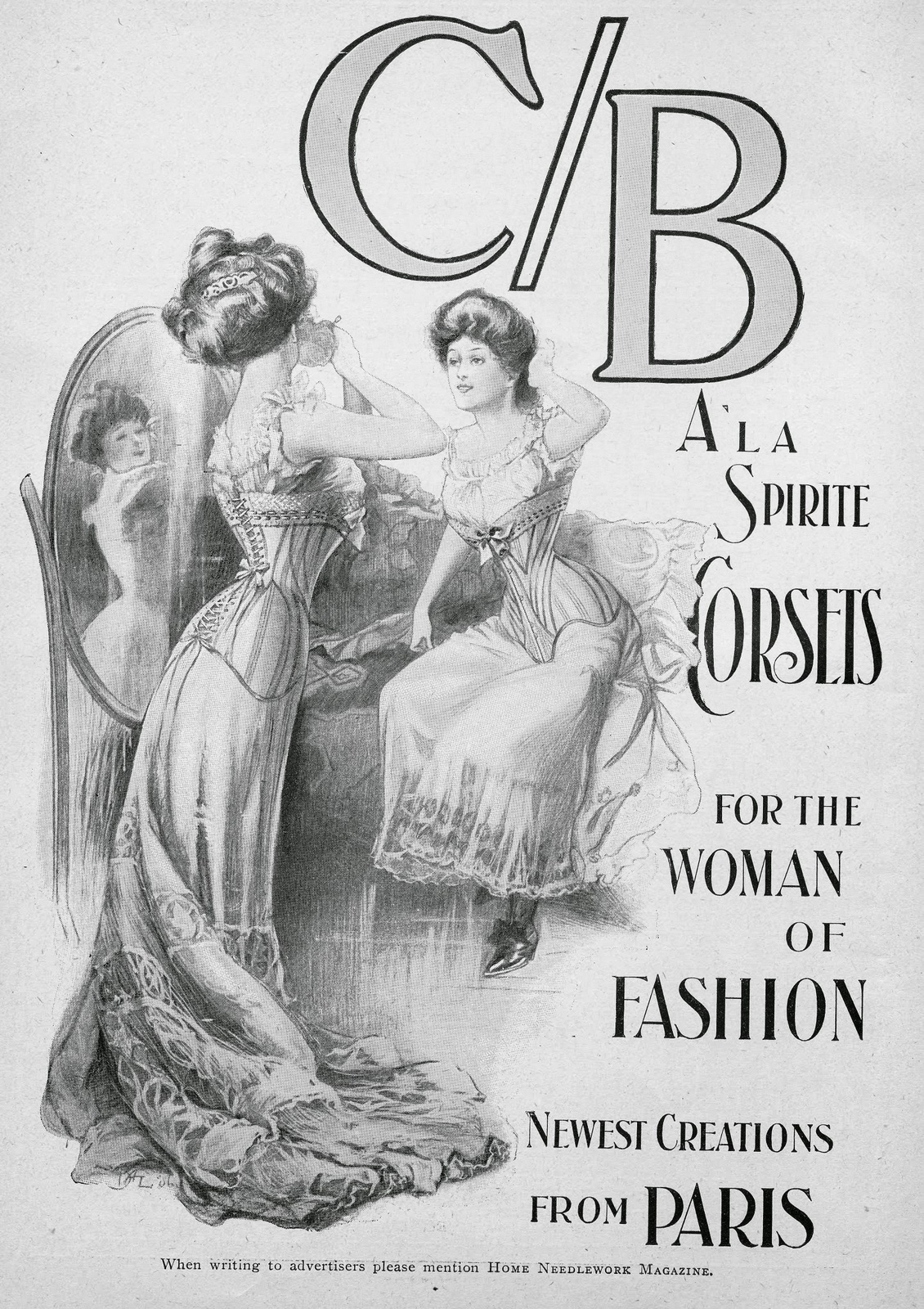 Our discussion of the fashions of that time period reminded Louise of a wonderful little book about corsets called “The Corset and the Crinoline: A Book of Modes and Costumes From Remote Periods to the Present Time” (1868) by W.B.I., available online at archive.org. 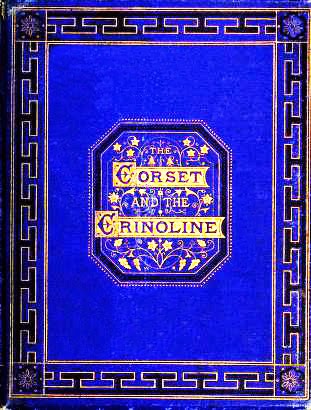 The book presents a somewhat dubious history of the corset, but contains a few noteworthy descriptions of attitudes towards that garment and other modes of dress.

“From periods of very remote antiquity, and with the gradual increase of civilization, much attention appears to have been paid to the formation and cultivation of the female figure, and much the same means were had recourse to for the achievement of the same end prior to 560 B.C. as in the year 1868. Terentius, the Roman dramatist, who was born in the year 560, causes one of his characters, in speaking of the object of his affections, to exclaim ---
‘This pretty creature isn’t at all like our town ladies, whose mothers saddle their backs and straitlace their waists to make them well-shaped. If any chance to grow a little plumper than the rest, they presently cry, ‘She’s an hostess,’ and then her allowance must be shortened, and though she be naturally fat and lusty, yet by dieting she is made as slender as a broomstick. By this means one woodcock or another is caught in their springe.’ ”

The author quotes Philip Stubbs (1585) discussing the dress of the Elizabethan period:
…Some are wrought with open worke downe to the midst of the ruffe, and further, some with close worke, some with purled lace so cloied, and other gewgaws so pestered, as the ruffe is the least part of itselfe. Sometimes they are pinned upp to their eares, sometimes they are suffered tohange over theyr shoulders, like windemill sailes fluttering in the winde; and thus everyone pleaseth her selfe in her foolish devises.”
The following is one of my favorites from the book:

“These privie coats by art made strong
With bones, with paste, with such like ware,
Whereby their back and sides grow long,
And now they harnest gallants are;
Were they for use against the foe
Our dames for Amazons might go.” 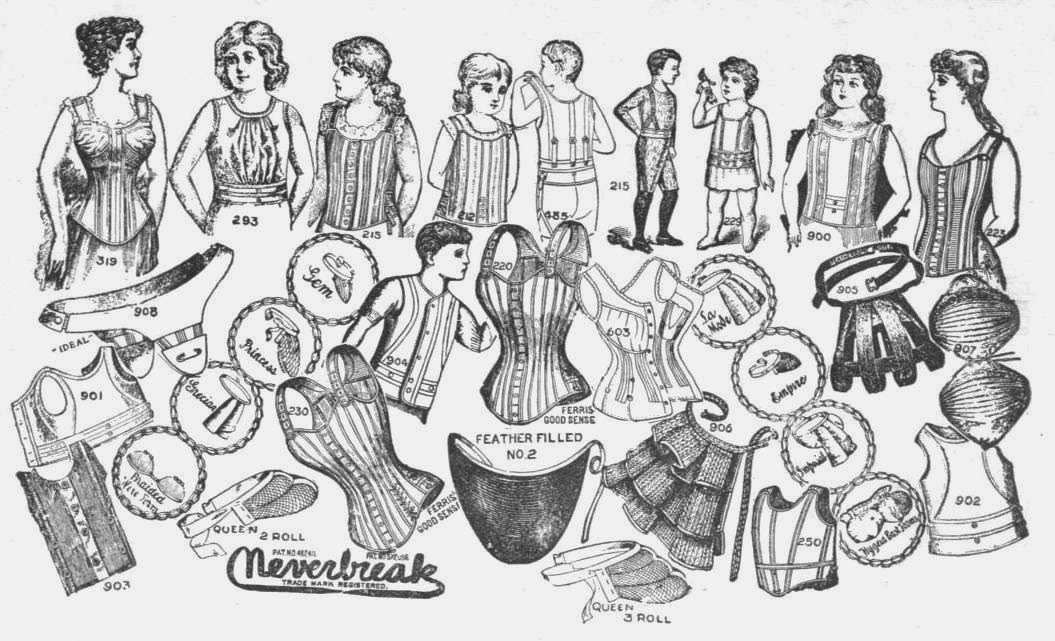 “The Corset and the Crinoline” is primarily an argument for the wearing of corsets. The author seems to encourage mothers to lace their girls up as early as seven years of age, and attempts to refute the claims made by the physicians of the time that the corset might be injurious to health by quoting testimonials from a current women’s magazine. The male of the species is not left out of the debate, and there are several men who chime in with their own experience of being laced.

I hesitate to whole-heartedly recommend the text of the little book, but it is an interesting (albeit one-sided) discussion of a major fashion item of the past, as well as being a treasure trove of old graphic images.

Here are a few more images for your enjoyment.

Thanks for visiting Bumble Button. I hope your enjoyed my small contribution to Louise’s wonderful site.

Much love to all,
Marie
Posted by bumble button at 3:27 PM 1 comment:

The Legacy is a small, but very full thrift store. Everything has been donated and the proceeds go to the Sebastopol Senior Center. The most wonderful thing is what they specialize in; sewing, quilting, fabric, crafty stuff, yarn, books, scrapbooking, stamping, embroidery, ribbon and trim etc. It’s like a Jo-Ann’s or Michaels’ thrift store. They also have vintage lace and linens. This little shop has been my soft place to fall. It’s magical. Now onto the buttons… My last name, Bouton, is French for button. Ironically I am now in charge of the button donations at the Legacy and I LOVE it. Wanting to make a pretty button card to sew the loose buttons on led me to the discovery of clip art. Luckily I found "JustSomethingIMade" and "the Graphics Fairy". Kindred spirits! Then I realized I had 1000’s of similar images, dating to the 1700’s. Inspired, I created a blog to share all this ephemera with you creative ones. All because of buttons! And that is how Bumble Button came to exist.

Images are for personal, and educational use only. My intent is to share images that have expired copyrights (published before 1923), are in the public domain and meet the fair use requirements.
If I have unintentionally infringed on a copyright please let me know so I can remove the image.
Images I own and scan from books, ephemea and photographs are copyright free as long as they are not used commercially.
Primary sources include;
The Baldwin Children's Library
Internet Archive
Wikimedia Commons
TuckDB
The Athenaeum

just some thing i made